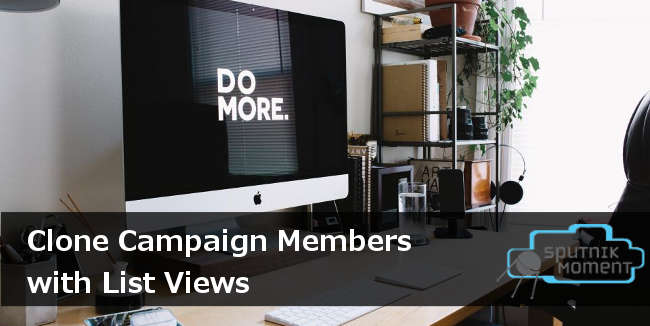 One question I get a lot is how can I clone campaigns WITH campaign members. The short answer is you can’t. But the Salesforce admin hack answer is YES WE CAN! (using a list view).

(I should note that there are technically two ways to accomplish this (that I know of!). But I am only going to address one in this blog post.)

First I’m going to briefly talk about a practical application for this – the one I hear the most is that organizations are using a campaign hierarchy to track a recurring event. Let’s say a monthly support group that meets twelve times over the course of the year, and they are registering people in advance. So they have their members signed up for the group for the year, and they want to create a campaign for each group meeting, take attendance, and update the campaign member status after the meeting (with who showed and who didn’t).

Here’s a quick and easy way to add members to a campaign – using LIST VIEWS!

First you want to create all your campaign records (so after January’s campaign record has been created, I would clone it 11 times to create the support group records for the rest of the year).

Navigate to the Contacts tab, then click create new view. Use the campaign lookup to find the first campaign you already created WITH the members in it (so our January meeting campaign)

After you’ve created the view, simply select the campaign members in that view, and click the Add to Campaign button

Then, use the lookup to find the campaign you want to add the members to. You can change the status if you want. You can ignore the Existing Members option because there are no existing members so it doesn’t matter which you choose.

Then click the add to campaign button in the lower right corner and you’re good to go! Rinse and repeat 10 more times to add your campaign members to the support group campaign records for the rest of the year!

New to Campaign? Check out the Salesforce implementation guidelines document.

Winter is coming. Notes and Attachments are dying.