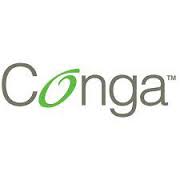 The three major changes that we will cover are; the revamped user interface, the simpler merge template creation process, and the integration with Google Drive.

While Conga’s user interface was never UN-user friendly (or "bad" for those less prone to web-speak), there was definitely room for improvement. Conga 8 has gone a long way towards capitalizing on those improvement opportunities.

1. The template list view has been greatly expanded and now allows sorting as well as the option to view the template record in Salesforce or download the template for viewing (the magnifying glass and page icons respectively). The option to upload templates from the local hard drive is also now available to all users as opposed to just admins (though this has to be enabled from settings).

2. Using the related contact field you can specify a contact for associating with an activity or for sending an email to if you’re choosing to process your document as an email attachment. (This option is only available when there is more than one contact associated with the record being utilized.)

3. This is the section for deciding your output options. While the arrangement is different the functionality is mostly the same, with the exception of being able to choose Google Drive as an option, which we will cover in more detail later.

5. The preview button allows you to download a document without processing any of the Activity logging or field updating so that you can verify the document before moving forward.

6. You can now access customization options from the merge page by using the Tools & Settings button, the image to the right shows the available options. As you can see this is where the View Data and Template Builder options can now be found.

Final Thoughts on User Interface: While no one likes having to learn an entirely new Interface, in this case it is entirely warranted and only serves as an improvement. (In other words, stick it out! It's worth it!) The added functionality means that documents can be created faster and with greater customization than ever before. If there’s any criticism that could be made about the new interface it’s that they don’t go as far they could: some parts, such as Conga Mail Merge still seem to be using the old interface style, which can create a bit of confusion since the two look so drastically different.

IMO, the the most straightforward and useful of the changes in Conga 8. Previously all Merge Fields had to be designed specifically as Microsoft Word Merge Fields, a process that required going into a menu to create every Merge Field. Now, simply encasing a field name inside double curly braces i.e. {{FIELD_NAME}} will automatically designate it as a Merge Field. In addition to being much faster this also allows you to use alternatives to Microsoft Word (such as Google Drive) for template creation if you so desire.

Final Thoughts on the New Merge Fields: There is really not much to say on this, it’s just better. One very important point is that since, at the time of this review, Mail Merge is still using the old user interface. This means that it will not work with the new simplified Merge Fields.

Like the new Merge Fields there's not too much to be said about the Google Drive integration of Conga Composer, other than it just works. It does need to be enabled on the custom URL for whatever button or link you’re using to run your Conga Composer, the parameter for this is “GoogleVisible=1”.

Once Google Drive functionality has been enabled you can choose Google Docs as your output option. You will have to allow access the first time – this is done by default all merged documents will be placed into a Conga Documents folder on your drive (though you can alter the folder that documents save to by modifying the custom URL). Instead of creating the document as a Google Doc you can also save it to Google Drive as a PDF.

Final Thoughts on Google Drive Integration: Google integration is a very welcome addition and the fact that it works so well is especially welcome. Again it would be nice to see Mail Merge get updated to match since as it stands right now Google Docs will not be an output option when using Mail Merge. Additionally, there is not an option for choosing a custom filename or even which folder in Google Drive that the document is saved to without modifying the custom URL. it seems like not having the ability to specify folder or filename in the interface is a missed opportunity.

Overall Conga Composer 8 makes several very impressive strides forward without losing any of the functionality or power. As stated several times throughout this review, the biggest drawback is that the changes have not been carried across all of Conga, a problem which will likely be resolved fairly quickly. In conclusion Conga Composer 8 is a great tool which will only continue to improve as time goes on.

Questions and Answers from Conga

(Disclosure: Sputnik Moment is a Conga partner (we REALLY love Conga!). We did not receive any form of compensation for this post.)

Jason Cook is passionate about finding new and inventive ways to make computers work harder for people, instead of making people work harder at computers. Contact him or anyone else on the Sputnik Moment team to find out which Salesforce apps might make Salesforce work harder (and better) for your organization.